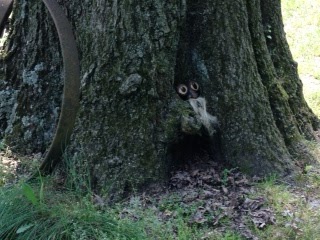 Where does the time go?

Is there a place that all those wasted minutes stack up? Large piles of hours and minutes and seconds of time just waiting to be used? Properly...

I’ve always been pretty good at time management. I am rarely late. I'm usually where I say I’m going to be at any given time and I try to use my time wisely. I’ll blame my mother for that one. She was the queen of time management.

I think back and wonder how she did all that she did. AND make it seem so effortless.

I try to emulate her, and without sounding conceited, I do a pretty damn good job at it. But I still seem to not quite measure up to my mother. She wasn’t a queen…she was a damned goddess.

I used to golf with an older woman who was spry and witty and funny and downright did not act her age. She cracked me up, turthfully, each week that I golfed with her. One day I asked her, "What's your secret? I want to be like you when I get older."

"Honey...", she purred, "when I hit fifty instead of adding a year at each birthday, I suptract a year. I'm now 27 and loving it more this time around!"

I’ve been driving in to see my dad once every week. He’s getting up in age and although in great health, his memory is lapsing and with my mom gone…well, I now have the hat of making sure everything is going smoothly with his home.

He has a bookkeeper that comes in three times a week and makes sure all his mail is sorted, opened and answered. A housekeeper that comes once a week to basically dust and put a load of laundry in. A handyman who comes two or three times a week just to putz in the yard and help out with whatever is needed at the moment. He goes to bible study once a week but has lunch with the minister at least twice a week. Those aren’t just 'gobble down a sandwich and leave' meetings, but two hour long debates on politics and the stock market meetings.

In a nutshell, he’s got a good support group at hand and isn’t just sitting around watching the time fly. He’s a pretty busy guy at 86…which in turn, keeps him pretty fit and healthy.

When I drive in I usually just spend the day. We’ll have breakfast, then do some paperwork, tour the yard (which is like out of Better Homes and Gardens) and many times dig up plantings for me to take home with me for my own yard. We talk, we laugh, sometimes we disagree and argue…but not much.

My dad was a ceramic engineer. He has over 65 patents in his name from his research. Many of them are only known in technical circles and others may be used by you daily. Long story short, he’s a brilliant man. A little quirky, but brilliant.

He has a dry sense of humor and likes to tell jokes. He has good delivery of them, and even if I’ve heard them before I like to listen. Growing up I don’t remember tons of jovial banter, he was stern. But lately there is some little prankster boy in him trying to get out and I never know what stunt he’s going to pull.

A few weeks ago we were out planting flowers in the front yard.

“Nancy, can you go get that curved downspout from over by the garage? I need to use it over on this side to divert some water into these beds…” he asked me.

“Sure thing dad…” Never one to question what hes asked of me I immediately started over to the downspout. I bent over to grab it and while lifting it up something green and animal like fell out and hit my thigh. I jumped, let out a small scream while my mind was busy trying to identify the foreign object.

Granted, the jump and scream were a bit of an overreaction. But just a week earlier I had a similar experience that I did not enjoy. While vacationing in Florida I would wake early and take my dog Sienna down to the beach and we’d walk, and walk, and walk. I wouldn’t turn on the lights so as not to wake BooBear. In the dark I would grab my beach shorts (normally discarded haphazardly on the floor in the dressing room), brush my teeth and comb my fingers through my hair and be off. I stopped briefly to check my reflection in the bathroom mirror. It was just getting to be daybreak so there was enough illumination to see a little, but not a lot. I leaned forward and peered into the glass. I dragged a washcloth over my face to get rid of the eye makeup smudges beneath my lashes. I put on some lip balm, straightened up, smoothed my tee and was about ready to go. I noticed that my camera strap was in my pocket…”Good” I thought, “I won’t have to search in the dark for my camera…”

Then my camera strap moved.

I know they exist.
I’ve seen them. In photos.

I quickly sashayed trying hard to move fast and make it to the bathroom without moving so IT wouldn't move. I was silently wishing my shorts were longer in length as the bug was now just at the hem. I got to the next room just in time to flick it OFF my shorts and into the toilet. I flushed so fast my arm movement was barely visible.

It was a palmetto bug about the size of my thumb. Yuck.

I texted my friend who owns the cottage.

'MICHELLE!!!! Your not goin to believe what crawled out of my pocket an almost got on my skin this morning!!!!…a palmetto bug. Or at least I think it was a palmetto bug. EEEWWWW’

I normally wouldn't call or text anyone that early in the morning, but I figured after that scare it was ok to wake her if she wasn’t up yet.

‘oh! THOSE are the GOOD bugs. They eat the BAD bugs’

Personally, I don’t care if it’s a good bug or a bad bug….if it’s on my skin…well just thinking about it is making the hair on my arms stand up…double yuck.

So my jump and scream overreaction over what turns out to be a toy?

This gila monster or something of its ilk came flying out the drainpipe, bounced off me and landed in the grass. I heard laughter and looked up. Here was my dad peering around the corner of the house laughing at me.

Not laughing, but snickering “tee-he-he-he” just like the little old lady in the book The Funny Little Woman by Arlene Mosel.

“DAD! What are you trying to DO to me! Did you put that there?”

“What? Where?” he replied with a gleen in his eye.

It’s kindof nice seeing this playful side of my dad. This week he rubber banded that same gila monster toy to a napkin holder that has geese on it. It looks like it’s biting the gooses beak. He did this while we were going over some tax figures. Nonchalantly he replaced the napkin holder to the counter and put the napkins back in as if nothing was out of the ordinary.

But also keeps me on my toes while I’m there. What will I find next week? It’s quite amusing really. Two weeks ago while out walking in the back meadow I saw something out of the corner of my eye that seemed out of place. I swung around only to find two large yellow eyes glaring at me from high up in a tree in the woods bordering the field. As my eyes focused on what was out of place it appeared to be a Halloween latex mask nailed to the side of a tree.

When I got back to the house and asked him about it his reply was, “Funny isn’t it?”

I guess time hasn’t gone anywhere. Or maybe it’s just managed to circle around in on itself. Or he's doing the same thing like the woman I used to golf with, except his math is a bit different. He IS brillabt after all.

My dad is not longer 86, but 12.
Playing pranks and giving me a heart attack.

I better get my will in order.
Just in case.

Who knows what surprises he’ll have for me in the future!
...and if my heart can take it.
:-)