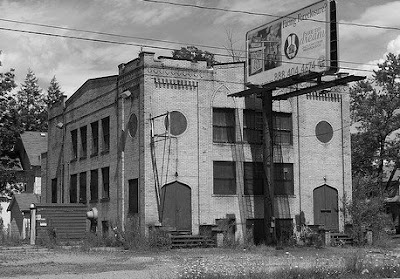 My dad's family grew up in the Girard/Niles area in Northern Ohio. At one time this was a thriving, bustling area filled with big Union jobs at the Steel Mills. There was a main drag through town where you'd find all the best restaurants and shopping. In 1977 there came a day called "Black Monday". It was the first closing of Cambell Works, of the Youngstown Sheet and Tube company. No notice was given to the workers, no programs for unemployment put in place. They just , closed up shop and left the carcass to rust. All the mills in the area had closed by 1982, which was responsible for over 93,000 jobs. Youngstown had the highest unemployment rate, skyrocketing to an overwhelming 38%. People started to move. Between the years of 1970 and 1990, Youngstown and the surrounding areas lost over 40,000 residents.

After the mills closed, "suspicious" home, business and auto fires started. On an average of 2.3 per day. The crime rate rose and Youngstown earned the dubious title of "Murder Capitol" in 1990 when it's crime rate surpassed Chicago, Los Angeles and New York. The change in Youngstown is quite evident with it's closed businesses, dilapidated homes and boarded up churches.
The reason I shared this history lesson with you is some of my extended family still lives in the Trumbull County area. My cousin works in Warren, but lives in Austintown. He had asked for some of my serving plates and dishes as he is hosting an Easter dinner this year. He's a Italian cook and if you've ever had the pleasure of attending one of his dinners....wow. He needs alot of extra plates, there is SO much food! For this years meal; He slaughtered his own lamb, made his own ravioli's, makes his own wine and has prosciutto hanging in his basement. It's one of those events that you try hard to get the nod of invitation to. So when he asks for plates? You bring him plates!
His trade was, "You bring me the plates, I'll take you out to dinner." Super. So on Sunday afternoon (to make sure he got all the extra dishware in time) I drove over to Warren to meet my cousin to deliver the goods and get fed in the process. I plugged in the address of the restaurant I was meeting him at in the Navigation system of my Jeep. I don't know that area of Ohio at all, so had never been where we were meeting before.
I take the Ohio turnpike there and after I exit I'm double checking the address. I'm sure that I didn't correctly plug in the correct info. There is no possible way that my cousin would be meeting me anywhere near here. And by my Navigation map displayed information, I'm just 3.2 miles from my destination. Depressed? That is an understatement for this area. One little town was called Leavittsburg. I'm positive the correct pronunciation was not how we pronounced it: Leave-It's-burg. It should be changed to Get-the-hell-out-of-town-burg....
In the few miles we drove through this little area I saw 6 "spas", 12 bars, and 20 closed down restaurants. There were abandoned houses with boarded up windows and burnt out cars on the side streets. There were restaurants with names like "the Chat-and-Chew", which might make sense if there was a railway nearby...but there weren't any. There was a restaurant that looked like a house turned into a restaurant called Millies Cooking. That had a sign that was hand painted and misspelled. No winner in English class there. Most of the bars had neon beer signs in the windows that were only partially lit. Apparently the beer distributors don't feel new signs would be a good investment there. And the "spas"? Hmmm. I guess it just goes to show that even in a dilapidated area....all people need a "happy ending".
Oh. And yes, I did get the invitation to dinner at my cousin's house for Easter dinner. Now I just need to find those stretch pants....
:-)
Footnote: If you look closely to the photograph, the sign in front of the boarded up building says', "Facing Foreclosure?" How ironic.
Posted by f8hasit at 10:48 AM