bring on the body cast... 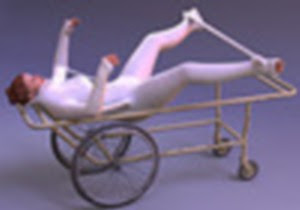 Sometimes what I say isn't quite what I mean.

It's happens alot.
More often in the last three months or so.
No. I don't have Tourettes. I don't start spitting out obscenities (normally) unprovoked. My mind is just moving faster than my lips...and so the word (s) that come out are similar, but not always the one (s) chosen by my mind. It's like my mouth has it's own drummer and by God, it's marching along to it at it's own damn speed.
My daughter has gotten used to it.
Most of my friends have as well.
There's a relative comfort zone for me. I can spout out whatever and they all know what it is that I mean, even if that isn't what I've said.
For instance, this morning as I was standing on my friend Melissa's front porch she was informing me that her daughter Lucy had been sick. Lucy had missed school the day before, but was feeling better on this gray Saturday morning. Just in time for her sleepover with my daughter this evening.
Melissa inquired if I knew about 'Neti Pots'. That wonderful cleanser of sinuses. Nothing like pouring water into your nostril to have it flush green stuff out the other side. I don't like the feeling of water up my nose. Never have. And although I know it's a good practice, I never could quite get used to the idea.
I have a really cool looking one that I had picked up with the full intention of using it daily in the winter months. My friend Pamela swears that since she's been using hers, she's never had a cold. Sounded good to me. I don't like colds either, so the Neti was now all mine.
I've used it once.
I'd rather be sick.
Really.
I would.
Like I said, I just don't like the feeling. Nor do I like seeing what comes from out of my sinuses. Although I must admit, the wall color of Boo's room kind of resembles the shade of that last infection...
So Melissa was asking if I was familiar with a Neti Pot. She's been giving Lucy treatments with it to rid her of the blasted infection. I said, "Yes, I'm familiar with them. But I don't use them. Often."
"I can come over later and help Lucy with it, if you don't mind. Either that or she can come back home when the other girls go to bed...but she'd prefer to stay over.", Melissa told me.
"I have a humidor that I can put in Boo's room. That might help."
It didn't dawn on me until Melissa called me on my cell that I had said humidor, not humidifier.
We laughed. I mentioned that "I'll just light up a big ol' Cuban for her and that'll take care of any ailments."
She responded with, "Yeah. That's how heroin usage usually gets started."
These are how our conversations go, Melissa and mine. Back and forth, building our laughter to a credenza until we can't breathe.
I mean, crescendo, not credenza. That's what I have behind my sofa.
She then shared with me a story of her neighbors sister that has the same problem as me. Mixing up words with others that don't mean anything close to what was meant to be said. It was so freakin' funny I almost peed my pants. Seriously. I did.
So, that's a warning.
Got coffee?
Put it down.
Possibility of needing to go to the loo?
Go now.
Her neighbors sister had a cast on her leg.
She'd been experiencing some severe pain in her foot. The doctor identified it as bone spurs, or it's medical term 'plantar fasciitis'. He suggested surgery as the answer. So she had surgery done. While at the grocery a woman had approached her to ask about her obvious injury as she was sporting a large, up to the knee cast. A total stranger expressing concern. Inquiring on how she was feeling. How nice...
She replied, "Oh. That. I got fellatio."
Fellatio.
(She meant to say 'fasciitis'. The medical term in order to sound intelligent. She didn't quite get that right.)
Excuse me? Come again? What. Did she fall off the bed and break her ankle? Knock her foot too hard on the headboard?
Fellatio.
She wondered why the woman, this perfect stranger, had given her such a quizzical look. It was just her foot, after all.
She didn't realize what it was, or recalled what she said, until later. Much later.
I'd like to hear her try to explain that the next time if she ever runs into her again.
I can guarantee that woman will switch aisles so fast and continue to do so as to not run into the woman ailing from oral sex. If it had been me she'd said that to, I'd have laughed my ass off right in her presence. I'm sure I would have. I'd have fallen into the cereal boxes like a rag doll unable to control myself. "Clean-up on aisle 3!" you'd hear blaring over the loudspeaker.
Oh yeah, I can hold it together...I'm cool like that.
Right.
Fellatio.
I love it.
Hell, I'd willingly be sporting two casts if that's the price you pay.
But really. Who am I kidding.
You can just put me in a full body cast. Thank you.
It'd so be worth it.
:-)