the stock market, family values and the recession...... 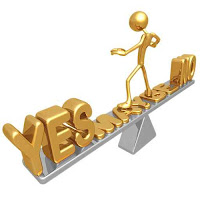 On one hand, it depresses even me. I'm not a financial analyst, but my dad has taught me well. He's a veritable genius with the stock market. I have several stock holdings that I watch with TD Ameritrade. They have this client tool that allows you to get live streaming feeds of the stock market. You can watch as things are traded...real time. I usually have it on the desktop computer in my office and glance at it every so often. Sometimes more than often...sometimes I find myself staring at it, willing the prices to rise.
Like today...at least people have started to pull their heads out of their asses (oops, did I just say that?) and realize that Apple stock is going to still be a good stock even if Steve Jobs is sick. it was sickening to watch the stock fall the day that they announced he was going to be working from home. One year ago the stock was trading at $192...it hit an all time low on the 20th of January trading at $78.
Most people are currently watching the stock market looking for the right time to sell out and not lose too much more money. I say stick with it and wait for it to rise...because it will, just not in the time frame that perhaps you want it to. It's going to take a little patience. But if you sell now...you've just locked in your loss. I'm not ready to throw in the towel just yet.
Yeah...some of my stocks have taken a beating. Hell, most of my portfolio has...but now is the time that I think is the best time to buy. I picked up an extra 100 shares when AAPL went that low. I didn't even buy my current holdings at that price. It was like going to a department store and looking at the clearance merchandise and seeing the perfect thing at 90% off!
But I guess I'm better off than most. I've been keeping my side of the street clean. I dot my i's and cross my t's, I pay my bills on time and have been fortunate enough to see this coming (although I didn't want to admit it) and started to put aside a little extra 'just in case'.
What's sad though is all the people that didn't. And now...they don't know how to handle it or what to do.
Like hearing about the guy in California that killed his entire family; his wife and five children because he was so in debt and didn't have a job. Or the guy in Columbus that also killed his wife and two kids. His brother had no idea there was a problem. Where were these peoples friends, extended family or acquaintances? Why did they feel that they couldn't reach out for help? Could it really have been THAT bad? How could they be so alone.......
It's tragic. It's sad. And it was utterly needless.
I'm of the belief that a recession or depression will actually help our country and our world. We have become so misguided in the past few decades that we need to get back to basics. We need to rebuild our communities, our neighborhoods, our families and our support systems. We have become so isolated....so ME driven, that we have begun to lose accountability for our actions. It's like that old Janet Jackson song, "What have you done for me lately".

But we need to get back to the basics. In particular, our interactions with each other. There has seemingly become a misunderstanding between independence and interdependence. With some things in this world, it's a strong positive to know that others have your back. That there are others that can take over and make it happen. But we've become way to dependent on that mindset. There has to be a balance between the two and we are leaning towards the latter. There has to be equal balance between the two to make our society work. Read Ayn Rand's, "Atlas Shrugged". Timeless. Classic. That will give you a better viewpoint.

People within our society have begun to think that it's not their fault. They point the finger and blame whatever has happened on someone else. Then they fall into the trap of wanting someone to fix the problem for them.

I don't wish to sound mean...but I have been doing what we all have been told and taught to do. I understand that I will be held accountable tomorrow for what I do today. It's the way that I was raised...with family and with faith.
I've never been taught to rely on others for help. I was taught to be self-supporting. However there IS a time and place when we need to put ego aside and ask for help...but not all the time. It is not my neighbors responsibility to make sure that my mortgage gets paid and I feed my family. But I can guarantee you that if I were in a position that I needed to ask for food assistance, they would be there for me. But the reliance on others for our basic needs has reached a limit! Because I have been doing what everyone should have been doing...I am now going to be penalized. It seems as though my next year taxes will be higher in order to fund the bailout for individuals that didn't do as I was taught. They were given loans and now can't repay them. They are working on keeping these people in their homes...and it's people like myself that will be footing the bill. No one is going to lower my interest rate of give me a break because I've been paying my mortgage on time like I was supposed to. Who is going to come by and pat me on the back with a reward because I've been holding my own without asking for help from the government?
Owning a home is not a basic right for Americans. It is something that we aspire to do if we work hard and watch our spending. Only spend within your means! It's simple! I just can't believe that more people don't get it.
I watched a video on YouTube the other day and this guy nailed it on the head. If you have an extra four minutes you have to take a look. He's great.
http://copywriterunderground.com/2009/02/11/we-live-in-an-amazing-amazing-world-and-its-wasted-on-the-crappiest-generation-of-spoiled-idiots/
The family unit itself has begun to falter in America. I am a divorced mother, not by my choice. I don't know that many people that haven't been divorced at least once. Some people I know have been divorced as many as five times! I don't quite understand that...that goes back to my thoughts on our disposable society. (blatant archive plug) There are few families that I admire and would like to emulate. My neighbors to the south of me are one of those families. They are the perfect (from my view) nuclear family. Both parents work, they are raising 3 children. Married and will probably stay that way, which is quite refreshing. They are a team. They don't always see eye to eye but they work together. Divorce is not an option. They eat together as a family. Typical round table style with discussions of the day. They go to church (well he doesn't go, but that's due to his belief on organized religion...which I also believe. THAT topic we'll address another time.) They are FAMILY.
But the definition of family is from Merriam-Webster's dictionary: "a group of people united by certain convictions or a common affiliation." We need to strengthen our family base. Rely on those close to you and ask for help when needed. A relationship is only as sturdy or as frail as you choose to make it. If those men had reached out to their respective extended families...those tragedies could have possibly been avoided.
In this time of recession we need to watch to make sure we aren't just focusing on money. It's not completely about how do deal with our financial situations that we need help with. A bailout plan isn't going to really 'fix' anything...it's just going to mask the problem for a period of time. Financial planning is great. But we need to work on the basics of home, of family, of friends. We should take the lean times and work on our personal relationships which is really the basis for all societies. It's nice for our economy to have the dollar strong and the stock market steady. But having that extra money in my pocket isn't going to bring me happiness. It might make me a bit more comfortable, but it's those close around me that really bring me joy.
We've devoted ourselves to chasing the almighty dollar and it hasn't gotten us anywhere good. This whole recession is due to greed. If we all start thinking about what we are doing, then the world is going to be and can be a better place for us all to live in.
And just in case you were wondering...AAPL stock is up 3.2% today. And Nancy has gotten off her soapbox in order to get her mortgage paid today...on time.
:-)
Posted by f8hasit at 9:17 AM