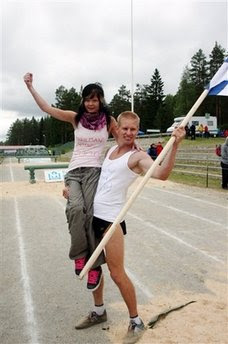 So I was a little bored and looking through some of the 'weird news' that gets sent around the web...

C'mon. Doesn't everybody check out all the weird news? It's hysterical! Plus in comparison, it makes my own life seem very droll.
Oh, did I say 'seem'? It is droll...but I like it that way.
Anyway, the news was that Finland won this years Wife Carrying World Championships! Can I get a woo-hoo! (woo-hoo!)
It's actually a rather big deal since Taisto Meittinen and Kristiina Haapanen of Finland, put an end to Estonia's 11 year reign. They took both the Gold and the Bronze. Wow. He ran 273 yards with two hurdles and a pool in 62 seconds.
62 seconds! With his wife on his back! Crazy...
But what I find most interesting is that there IS a World Championship. Who knew? Apparently, I don't live in an area where wife carrying is a sport. There are competitions all over. They have a huge competition in Canada, Europe and even Maine has a big festival where the winner could possibly move to the finals in Finland. I'm to understand that everyone wants to go to the one in Finland. It's the most fun and shows that you've 'made it' on the wife carrying circuit. Also the one held in Finland is the most popular...because the winner gets his wife's weight in Beer.
Yes, you read that correctly. Beer. What a prize. Seems a perfect fit for a prize if you really think about it.
There are 3 different popular ways to carry your wife, with the Estonian style being the fave. That's when the wife wraps her legs around his neck and hangs backwards and upside down behind him. I suppose that would be the most popular since they've been winning this thing for so many years in a row...
I was so intrigued that I even looked up and read some of the rules. Which was such a good read that I had to post them here for you. I particularly like the "The contestants must have FUN." How cool.

The original track in the rough terrain with fences, rocks and brooks has been altered to suit modern conditions. These following rules set by the International Wife Carrying Competition Rules Committee apply:

meters
-The track has two dry obstacles and a water obstacle, about one meter deep
-The wife to be carried may be your own, the neighbour's or you may have found her further afield; she must, however, be over 17 years of age
-The minimum weight of the wife to be carried is 49 kilograms. If she is less than 49 kg, the wife will be burdened with a rucksack containing additional weight such that the total load to be carried is no less than 49 kg.
-All participants must have fun
-The only equipment allowed is a belt worn by the carrier, the carried must wear a helmet.
-The contestants run the race two at a time, so each heat is a contest in itself
-Each contestant takes care of his/her safety and, if deemed necessary, insurance
-The contestants have to pay attention to the instructions given by the organisers of the competition
-There is only one category in the World Championships and the winner is the couple who completes the course in the shortest time
-Also the most entertaining couple, the best costume and the strongest carrier will be awarded a special prize
Participation fee is 50 euro

And what about rule that "the Contestants have to pay attention to the organizers"...duh. And the "wife must be your own, your neighbors or found further afield, but must be of 17 years of age." What does 'further afield' mean exactly?

As I looked at the photo and thought about this event, it brought a memory back of a guy I dated a few ions ago. He was adorable. Blond, tan, built like a brick shit house...but tall. Like, 6'6" tall. Now some may think this a turn on, but I was 5'6" and rather thin at the time. He had this really annoying habit of picking me up and tucking/carrying me under his arm. What's up with that?

I felt like I was some sort of little toy. "Hi guys! You meet my new little girlfriend, Nancy?"

He drove an extremely cool old International Harvester truck. But of course, it was big. Huge, big. So he'd pick me up to put me inside. It was cute, for a short time. But got old really, really quick.

Adorable or not. The man had to go.

I wonder about him from time to time. Maybe he's in on this whole 'wife carrying' competition. I bet he'd be good at it for getting so much practice without ever realizing he was in training.

I wonder if I still have a photo of him somewhere.

I'll tuck it under my arm...just for old times sake.