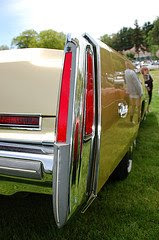 As I see it, I'm disappointed that we've become a nation...no, a World that has become such a disposable society. Everyone is looking for the quick fix, the easy way, the fast cash, the one step up without the work. Have a toaster that burns? Buy a new one, throw the old one away. Car that doesn't quite show the world who you are? Trade it in. Need new curbside appeal digs so everyone thinks you're successful? Become house poor because it's more than you can afford. Have a girlfriend/boyfriend/wife/husband that doesn't fit your needs or lifestyle any longer? Get rid of them and suit up with someone else...who will be oh so much better. Yeah, right.

Does any of this sound familiar? Has it happened to you personally? Do you KNOW someone who got caught in that same quagmire of bullshit?

No no, not ME, but I have known some people that have done ALL the above. Living beyond their means to prove to the world how great they are doing...all the while hoping the ATM machine will fork out at least a twenty the next time they try to get cash.

My parents didn't raise a fool. (keep you opinions on that to yourselves, thanks) I was taught the value of money at a very tender young age. My dad owned real estate...quite a bit of it. I remember growing up we always had a 'nice' car and a regular one. In our case, usually the nice car was a Cadillac and the other a Pontiac or Ford. I remember one particular Caddy we had that was gold, with an landau roof and cream leather interior. It was laid out. Superfly, if you will. It was the late 70's and it was as large as a small boat. When my mother would drive you couldn't see her head above the head rests if you were behind her. I have memories of roller skating after school and my mom would come to pick me up when I called.

I didn't want my friends to see my mom drive up in this 70's pimped out car. Some of my roller skating buddies families didn't have Cadillacs. They were regular folks, blue collar families. And this gold Cadillac was dreamt up by someone all hyped up on something up there in Detroit. It screamed for you to carry a cane and wear a fur hat. My dad bought his cars in cash. And I remember him saying, "I got a very good deal on it....". I bet.

One of the properties that my dad owned was a trailer park near downtown Toledo. I don't remember how many trailers there were at that time, but it was full. I took my savings and bought one of the smaller trailers and rented it out. I collected $60 a month for it, saved that money and bought another larger trailer which I received $85 a month rent. I was an landlord and I was collecting $145 a month rental income, putting that in the bank and watching my savings grow. I was 11 years old.

When I turned 16, many of my friends were given cars for their birthdays. The benefit of growing up in an affluent suburb. I didn't get one for my 16th, I bought my own car. My first car was actually a hammy down from my brother Charles', who I'm sure charged me an inflated price. The gas tank gauge didn't work, so you had to carry a Ball jar full of gas so just in case it ran out of fuel on the way somewhere. You could pour that into the carburetor and it would buy you enough mileage to get to a station. One time I had forgotten to fill the jar back up and ran out of gas on my way to school...some of my friends stopped and pushed it the rest of the way. Could have carried the darn thing, it didn't weigh much. It was a small 2 door Fiat Sport Spider. An attractive shade of yellow with a black convertible top and burgundy interior. With the top up it looked like a overweight bumble bee. With the top down....well, I was just too damn cool in it to care what it looked like. When it broke down, I fixed it. I finally gave it up when the engine seized and then it was just a shell of an old, once very cool car not worth much since there was no way to make it go.

But the lesson was....this car was mine. I paid for it, I fixed it, I loved it. It lasted many years beyond it's normal life expectancy because of that. If only people would apply the same to everything in their lives, the world would be a better place and there would be less landfills.

Not everything should be disposable. It's nice when traveling to have disposable razors and such. But we've carried our need for replacement beyond where it was intended to be. There's always something better, greener, more fulfilling on the other side of the fence. But once you get there you realize that it was just the way the light was shining on it...it's not better at all. You just landed yourself in a new pile of shit when you could have just cleaned it up in your own backyard. Sometimes it's even worse than where you came from, but by then you can't get back over the fence again.. You were fooled by nifty lighting, illusionists tricks with smoke and mirrors, egged on by the feeling you get when you have a new toy. Only to find out that it isn't made all that well and breaks within the first month of ownership.

This idea of replacement extends even into the political arena. Now, I don't really want to talk politics...people get SO angry and personal about it. But I have a friend that feels Barack Obama is like the next coming of Camelot. That would be great if someone were to walk into Washington and fix everything with a magic wand. But it ain't gonna happen. Do you know why? Because we have become a disposable society....

As soon as he fails to live up to what he's promised to bring, people will start thinking that this bright shiny new toy isn't any better than the last toy. And the thought of replacing it with someone else who WILL make everything all right will begin once again.

I have some simple guidelines that I live by. Let me share them with you.

I know, this is tough for most people. I had to explain it to a friend the other day in terms she would understand. Don't buy those boots if you can't afford to pay for them in cash or pay off the credit card when the bill comes. You think you are getting a good deal because they are 25% off. But if you put them on a credit card, pay 18% interest over a 4 month period, you've actually paid more for them than if you had paid full price. Doesn't make much sense.

There's always going to be someone who has an nicer car, a nicer house, a better looking boyfriend, a more expensive vacation getaway. It doesn't matter! If you start with the comparison thing you are going to make yourself very unhappy. Look around you! YOU are probably better off than loads of other people. They would love to step in your shoes...so enjoy what you have. Forget about what you don't. It's nice to have goals...but don't let them run your life.

Pretty simple thing, yet so many people don't do it. Tell those around you on a daily basis how much you care for them. How much they are appreciated in your everyday life. You might not get the opportunity to do so tomorrow and that would just suck.

I try to make a mental list everyday about what I'm grateful for. I've been fortunate to live a gracious life thus far. I've traveled extensively and had many fabulous experiences bestowed upon me. There are some days and events that I would have preferred not to have experienced firsthand, but it has made me who I am today. My dad always said that in everything there is a lesson. As long as the lesson is learned, it's okay. It's when you continue to choose the same paths expecting different outcomes that you mess up. I'm grateful for where I am, who am I and all that I am.

You only get one. Each day is a new opportunity. Sometimes we get so caught up in the routine and responsibility that we forget to live. I've been guilty of that in the past....not anymore.

I'd tell you how to do that, but I haven't figured it out yet. :-) Still working on this one. Newly single again, I have more time to devote to myself. Its been empowering. Instead of looking at the break-up with remorse, I'm now looking at it in a positive fashion. I can do anything I want and don't have to answer to anyone but me! How fun is that! Talk to anyone successful and they all mention that they have their own 'zen' time to reboot.