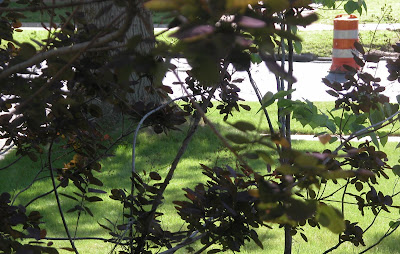 For an self proclaimed ultimate optimist; things have a way of going terribly wrong for me as of late. I think it's my timing...or lack thereof.

It's not always been this way. I used to have it down. The pendulum of good timing and fate would always swing in my favor. It was easy to pick me out of a crowd. I'm the one with the rose colored glasses on. (figuratively, not literally) Maybe I got so used to the smooth ride, I didn't realize that it wasn't going to be permanent. Perhaps in my days gone by I was too damn busy smelling the flowers to see that they had been fertilized with cow shit.
But whatever the reasons, there are certain things that I KNOW will happen. If I do A. then B. will happen. If I choose to go straight to B. or avoid A. then C. will kick into place. These are lessons learned from much experience. There are times that it goes straight into H., I., J. and K. And trust me when it gets into the M. & N.'s, you REALLY don't want to be around.
For instance...if I wash my car, what do you think happens? Yes. It will rain within 10 hours. Not less than 8, because then I could get another car wash for free. It will be over the time stamped 8 hours on my receipt at the car wash.
And if my car gets detailed do you have a notion as to what I might expect? Most people will enjoy a nice clean ride for many months. But no. Not for me. I can expect my two big dogs to jump into it as soon as I open the back to retrieve the groceries. And if I command them to "Get Out", of course they will jump over the back seat and into the front, leaving big dog foot prints the entire way. OR my daughter will try to open a pixie stick and it will spill "soon to be forever there" sticky sugar all over the newly cleaned carpets.
I do try to keep my car relatively clean. I've always had black cars with black interiors...but for some reason my latest car purchase was a Jeep Commander in white with light tan interior. Odd purchase for those who know me. It's a 'pretty' truck if you will. And actually the white has been rather easy to keep presentable. I have an American Bulldog that would have been a nightmare had the interior been black. Ask my ex-husband...his car is black inside and he hardly will take Stuey anymore due to the amount of stiff, white, short hairs that get left behind! Sienna on the other hand is a Labradoodle, dark brown and curly; but the poodle in her makes her not shed. Great trait for a dog. So Stuey's short white hairs don't show up that much on the leather seats, until that is if someone sits down with black pants on. But that's a whole 'nuther story that I'll share at a later time a date.
These are just but a few examples with 'the car' in mind. Now expand your mind to incorporate all the other facets of "Nancy's World" and you'll begin to understand the title of the blog itself.
For instance, I just had my windows and screens professionally washed. My home has ALOT of windows, large windows and I was soooo amazed at the difference when they are clean. I've had Chuck doing the windows for many years, usually twice a year...that way they look pretty good all year round. He wasn't able to make it last fall due to some back surgeries he had. So when he came out last week, it made a HUGE difference.
I awoke this morning to the sound of trucks, large trucks with the backing up beeping noise they make. As I look out my window I see there are several dump trucks and large street vehicles parked and getting into position all up the street. It's 6am.
I live on a street that has over the years become one of the worst in our city due to the potholes. The city's mayor lives on our street. I believe that he thought if he'd 'okay' all the other streets resurfacing projects before ours city residents couldn't criticize him for favoritism. I know where they are, so it's not that much of a bother...plus with the Commander, who cares; it's like off-roading. They sent out a notice that our street is scheduled to be re-surfaced this summer. I figure that they would wait until later in the year, after schools have let out for the summer since there is a elementary school on our street corner. But no; they are starting the project today.
Cool. Except that the truck that goes and chews up all the asphalt, delivers it on a conveyor belt to dump into a waiting dump truck? Yeah, it has stirred up an enormous amount of black dust. I've closed all the windows so to hopefully protect the clean screens. But the windows? They are covered in a fine film of black soot. The front porch so newly washed? Soot. The cushions on the chairs on the front porch? Black soot again. The carpet under the chairs? You got it...black, and not on purpose.

Let's take this one step further shall we? The white cat that lays on the cushions on the front porch that is now black? Uh-huh. Ever give a cat a bath? Not going to try that again. Oh, and the dogs? I've now got black paw prints in the car from the dust that is on the driveway.
I will have a new beautiful street in a few days so people can speed up and down. But had I known of their scheduling for this project I might have waited to have the windows washed. I might have done something else with my Saturday that prepare the porch and decks for summer entertaining. All this work is a waste. It will all have to be redone.
So be it for good intentions. I should've just let it all be, forgot about what it looks like and had a couple of beers, some chips & guacamole and set my ass down on the decks chaise lounge with a good book. But no; I thought I'd be proactive and get everything clean and presentable. As you can tell; it's all in the timing...
or lack thereof.
:-)
Posted by f8hasit at 10:00 AM