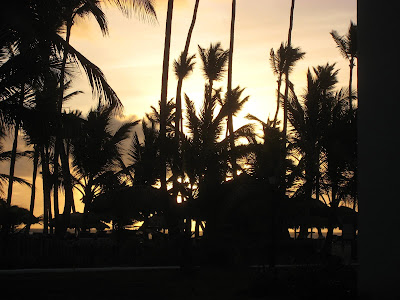 The worst part of going on vacation is coming back to reality.

It can also be great to return to all that is yours; your own pillow, your bed, your family and friends, that pile of laundry that didn't get put away before you left...
I just returned from a fabulous trip with one of my best friends, Morgan, to the Dominican Republic. Or the Republica Dominicana since I'm now so fluent in Spanish. I can ask where the bathroom is; ¿Dónde está el de baño? Or black coffee, please; Café negro, por favor. The ever typical Good Morning, Good Afternoon or Good Evening; Buenos Diás, Buenas Tardes, Buenas Noches. The omnipresent, "No, thank you" for all the people selling things; No, gracias. And of course, my favorite. Una Mamá Juana, una de agua y una cerveza, por favor. (one Mama Juana, one water and one beer, please.) Sometimes it was dos (two) for all of those; one for me, one for Morgan.
Mama Juana is the local drink. It's a mixture of honey, rum and red wine soaked in this tree bark and herb mixture. Supposedly an aphrodisiac; it's the local version of Viagra. I don't know if that tale holds true, but it sure is tasty.
We met these crazy Germans also on holiday and met up with them daily. They were

all quite the drinkers, and funny. Sometimes they'd have me laughing to the point of tears. Who am I kidding....I was always to the point of tears! Rosie, Norbert and Otto. Otto had no english at all, which was a little hard at first. Interestingly enough all those games of charade came in quite handy. Nothing like making vroom, vroom sounds to let them know how it was in my little Renault driving the Autoban in Germany. Or Otto tweaking his nipples in the ocean to let us know that indeed the water was cold. I was quite relieved that he knew I 'got it' so he didn't approach and tweak mine just to make sure all was understood.
Rosie and Norbert managed pretty well with their English. They are married and I believe it is their quest to also find Otto a wife. It was hysterical! I got the idea that they thought either Morgan or I would be 'just fine' for the job of Mrs. Otto. Never mind the language barrier! Norbert would say, "Rosie MY woman! Gutte woman, MY woman" and then make these gestures that let you know they had an active sex life!
Morgan and I the entire week would laugh ourselves silly over our trying to say: "Barbara WaWa wanna Mamá Juana". Don't ask me how that even started, but it stuck. So one day we got the Germans tying to say it. They would do their best....but OMG, I really needed the el baño then. It became our groups motto for the week. We would all hit the beach bar in the morning and tell Carlos, our friendly bartender, in unison..."Barbara WaWa wanna Mamá Juana". What a great start of the day.
I would go back to the Domicincan in a heartbeat. Great food, great friendly people, great atmosphere. You can't beat the beaches or water. And I would think it hard to find a better vacation destination value anywhere. Where else do you order a lobster dinner and can't finish the lobster?
We stayed at the Occidental Grande Flamenco. It's a beautiful large resort, but was one of the originals. The rooms (at least ours) needed a little TLC. I think we were in one of the first built by the looks of the plumbing. Sure, there were some other resorts that looked a little nicer and trendy than the one we stayed at, but I'm sure they were paying a little more dosh than we were. Perhaps on my next visit I'll kick it up just a notch. I had no complaints except for this one. Estas mujeres blancas están exigiendo una ducha de agua caliente. (These white women are demanding hot water for their shower.) Once they fixed the hot water in our room, hey...it's all good.
So for right now, I'm relaxed and glad to be back home. I just need to find a ama de llaves (housekeeper) to do my laundry, a cantinero (bartender) to bring me a cocktail and a someone to give me a masaje (massage). My tan is already fading (damn) and although Spring sprang while I was gone and it's quite beautiful outside...it's not quite like the sound of the ocean on my morning walks.
I'll just wait for my Spanish version of Rosetta Stone to arrive to prep myself for my next Dominican vacation. I've already started the cuenta de ahorros de vacaciones! That would be the vacation fund for all you Gringos...
:-) 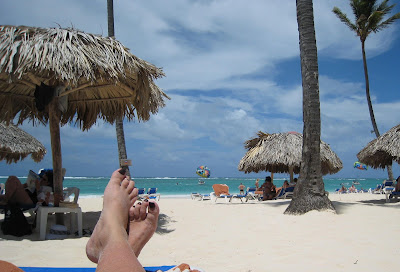 Not a bad view.
Something I could definitely get used to. Ahhhh....Life is Good.
Footnote: IF you get to the DR you can buy said Mama Juana to bring home. One thing is though, if you are traveling to the US you can't bring it in DRY due to argriculture regulations. HOWEVER, the customs guys helped us out instead of throwing out our bags of Mama Juana, they instructed us to put it into Ziplock bags with a slight douse of liquid...run or wine. That way you CAN bring it in. Weird, but whatever...I got my Mama Juana! I can only imagine how many bags they throw away daily because the people selling it to you don't either tell you or know of the restrictions. Also, those cute straw hats and woven bags? Don't try to bring those back either...they are considered plants and can't make it through customs!