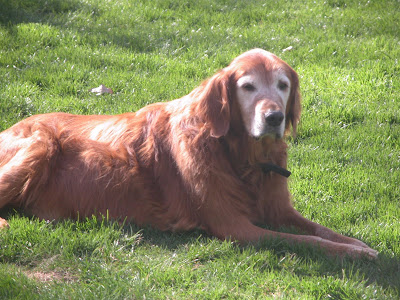 My friend Theresa, over at An Officer and a Garbage Can, just posted a blog about a recent trauma experienced by her dog, which landed poor puppy in a cone of shame.

And it got me thinking and remembering some of my own memories of being the caretaker of a dog dealing with the same indignities of said cone.
Cameron.
Cameron 'Wideload' McDonnell had a thing for tennis balls. It didn't matter his age, whether he was 6 months old or 16 years, that dog loved his balls. Tennis balls, that is. He had no others after that six month mark.
He'd sleep with them, carry three or more in his mouth at any given time to make sure he always had 'backup' in case one fell. He could catch the damn things even if you threw them at lightning speed like you were at the fair trying to knock down milk jugs. This dog lived for his tennis balls. (and the occasional long rub of the underbelly)
Lard butt, I mean, Cameron blew his knee out in his 10th year of life. Getting older for a big dog.; 120 pounds in his prime. He would've been retired if in the big leagues, but this dog knew no boundaries that pertained to him. Balls. Water. THEY were there in existence for him.
It was an afternoon like all afternoons for the golden dog on Summit. Plate of wet food, walk in the morning, scratch of the once there testicles...all is one with the world of Cameron. And then he zigged for the extra inch in order to catch the ball in the backyard and Cameron's Glory days came to a screeching halt.
The first of the surgeries was successful. We brought home a tired but 'happy to be here' puppy brained dog' with the highest tech device to keep Cammy from getting around to his knee to disturb the healing wound. It was a navy blue, slick microfiber type air cast of sorts that wrapped around Cam's midsection. It would allow him the mobility to get around but keep him from contorting himself into a position to get at said wound. It allowed him the dignity to walk through doorways without the resounding 'thump' of traditional cones.
And for 6 hours this worked.
I awoke to come down to check on the baby (dog) in the living room as he was too heavy to carry up 3 flight of stairs and couldn't handle that trek yet on his own. I was shocked to see him licking his way into the suture with exuberance. Midnight call to the doctor and Cameron was back at the Animal Hospital to have his suture restitched and the wound completely cleaned out. This time they sent him home with the traditional CONE, which for a dog of Cameron's size was the size of tuba flared bell. He couldn't make it through any doorways in the house and as such was completely confined to the living and dining rooms. He hated it.
And as such, he managed within 4 hours to get out of this contraption which now landed him back at the Animal Hospital for the third try at fixing his tennis knee.
This time they were taking no chances. Drug Mart mop bucket, price tag still on the side was placed on his head after the bottom was cut out. Holes on the sides tied with surgical gauze connected this bucket to his collar. There was no way out. There was no way to move this. He was stuck with this for the entire summer.
For the next 7 weeks Cameron lived as a Bucket Head. He never barked, he didn't growl, he didn't whine. NO sound came from the poor bastard, at all, for the entire 7 weeks.
He DID try to bark at the mailman the first day, but gave that up due to the brain trauma from the reverberation of his barks inside the bucket. My ex felt that it was too loud for him to bark. I thought he didn't bark because he didn't want to bring any undue attention to his condition because he had a mop bucket tied to his head....
Either way, it was the quietest summer this neighborhood of dogs has ever had.
To eat, we got a smaller bowl so he could just rest the bucket on the ground and chomp to his hearts content within the bucket zone. That was a strange sound coming from his bucket when he ate. He started peeing like a girl dog and squatting, because he couldn't balance this bucket head with his normally high range of spray.
By the time his leg was healed and we received the bill for the 3 surgeries needed, we could have bought 3 Cameron's...but he stayed with us and brought us joy for another 6 years. He finally was put to rest in the Fall of 2007. He was one of the best dogs....ever.
Cameron 'Wideload' McDonnell, aka: FatBoy, LardButt, SweetPea has a special story with everyone who met him. Happy 'till his last breath, I only wish I could approach life with the 'caution to the wind' joy that he did. The love until it hurts thought process. We have much to learn from dogs. It doesn't all have to be high tech, dissect every thought, analyze every emotion and action. There is a simplistic way a dog goes through life and finds happiness in the mere basics.
I want to come back as my own dog in another life. Is that possible? Maybe. If time travel can happen. And if possible, wouldn't that just be grand.....
Although I'd probably end up with one of those owners that dresses up their dogs. I'd have to find a way to cut my doggy life short, strangle myself with the cone.
And that...would just suck.
:-)
Posted by f8hasit at 9:53 PM