the art of contortionism 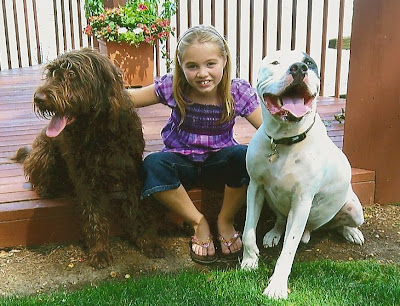 If needed, I have found my new line of work - a contortionist. I've been practicing this art for almost 2 years now. Ever since Stuey and Sienna decided to lay claim to my side of the bed. It all started innocently enough...and then, WHAM! I found myself to be involved with the nighttime act of contortionistic ritual.

I used to own two perfect dogs. Cameron, a 120lb. golden retriever whose only goal in life was to play ball and make you happy. Oh, and the occasional stolen plate of food; Ferris, a bouvier mix that was the coolest dog ever. Both of them were aging...although aging well, nearing the 16 year mark...which as you know is pretty darn old for big dogs. One fall day we happened into a pet store and there was Sienna, the cutest Labradoodle you've ever seen! Chocolate lab and Standard poodle mix....she's a Rastafarian lab. Gentle brown lab eyes, doesn't shed, doesn't bark except for a few yips here and there and fast as the wind. She has this habit that when you pull in the driveway she runs like mad toward the back of the property...over the koi pond, around the playhouse, around the garage and tries to reach your car just as your pulling into your spot.
When Sienna was a puppy we had to cage her - first time in my experience of dog ownership to do this. At first, it upset me...but then she would just sleep in her cage even with the door open. That was her 'safe haven'; her home. By this time we had put Ferris down and Cameron was too old to even make it up the stairs to sleep at the foot of the bed where he always was. Then the day came when we had to put Cameron down too. That was a sad day.
But then Stuey came into our lives. He's an American Bulldog. A white muscle dog with a big head and a black eye. Like Petey in The Little Rascals. His owner had had a tragic accident that took his life and Stuey was too much to handle for a couple of homes he had been transferred to. I had been asked to watch him 'for a few days' while my ex-husband was traveling and he in turn was 'babysitting' the dog while Stu's temporary owners were on vacation. He came to my house and he's never left. I am in love.
When Stuey came we gave away Siennas' cage. I think that's when the problem began. Both dogs then began sleeping on the bed - MY side of the bed. It would start out okay, they would both curl Yin/Yang style right below my feet. But somehow in the middle of the night I'd wake up, find myself with no covers on parts of my body in some weird contortionist pose just to lay stake to a PART of the bed that used to be mine. I'd push or shove with my feet with no results...both dogs lying happy and dead asleep. There have been nights when I'll leave the bed to go sleep with my daughter it's so bad. On other nights I get fed up and push them both off, rearrange my covers and start over. But then one dog will slink up and then the next crawls under the covers and 3 hours later I'm in that same proverbial boat. The one cruising down Contortionist Lane.
But so be it. It's a small price to pay...a night stretched out. I'd rather the adoring looks I get when I awake. They follow me when I get up. I'm up rather earlier than usual after awaking without my covers, my legs askew curled into an unnatural position at the top quarter of my bed, sitting at my computer writing this. Both dogs having left my comfortable bed AFTER I got up and sitting here at my feet. Sleeping stretched out is something that now I experience on vacation only...which makes the vacation all the more sweet. But even then I find myself waking up in the same position that I did on this morning.
They've trained me well. :-)
Posted by f8hasit at 5:34 AM