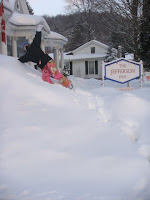 I've always enjoyed skiing....the fresh scent and crunch of the snow, the wind in your hair (I don't do helmets, yet), the excitement of the downhill speed. It's always better when there is a fresh covering of snow. We join another family and go to New York skiing every winter; an annual event...but being in the North East, you just never know what Mother Nature has in mind. One year it was below zero, without even the windchill factored in; one year we could've been wearing shorts. You always pray for good snow, point the car east and hope for the best. 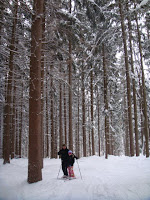 Little Sophia is 6. She was the youngest in the ski pack. We are buds...I help her with her boots and equipment and she gives me hugs. It's awesome. I hung back with Soph and her dad, and let the older kids ski ahead. She said, "You stick with me. I'll show you where all the secret trails are." And she was right...she did. We finally had to pawn her off on someone else in our group, who is an excellent tree skier, because he was the only one who could keep up with her through all that.

I was amazed at my own daughters progress in skiing. She's only been at it for 3 years now. If you get close enough you can hear her humming while she skis. She's got her own inner beat. I saw her take a few spills when she was airborne and had a bad landing (which scares me...but what can I say)...but she just picked herself up and went on her way. It's very cool.
Both my daughter and I were positioning to stay an extra day the company and snow was so great. I called around, even to a neighboring town to see about lodging. Nothing. Nada. Our friends offered to let us camp at their place, but that was just a few too many bodies crammed into a small space with all the stuff. I mean, even for the 6 of them it was cramped. But that was really sweet and heartfelt...and it crossed my mind to take them up on it, but then I thought about the 1 available bathroom and changed it quick. There was a condo efficiency for rent; but that was going for a cool 3 bills....and in this economy we couldn't quite feel right about that decision. Plus then another day of lift tickets, food, ski school and incidentals...you've already racked up another $300 plus. Maybe that's why the slopes were as empty as they were. It's definitely not the cheapest sport on the planet. It's one driven by accoutrement's. LOTS of stuff. Lots of EXPENSIVE stuff. Perhaps that's the reason the slopes weren't packed.
But I suppose I can wait on that commentary another day. Today, everything is right with the world...the snow has that effect on me.
:-)
Posted by f8hasit at 8:50 PM