events that change us... 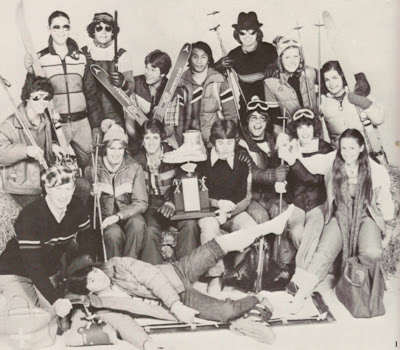 High school reunions.
What does that bring to mind to you? Happy memories? Sad times? Does it bring up fond recollections?
These three small words evoke a series of emotions in me. The main one packs a punch in a mere seven letters.
Anxiety...
There really isn't any reason to be anxious, at least not yet. The notice said the reunion isn't until next July. I responded that they can plan on my attendance, but I'm already thinking that perhaps I may not go.
If I haven't stayed in communication with my classmates up to this point, why would I need to get in contact with any of them now?
My high school years weren't filled with the typical angst that you normally hear. It's not that I'm trying to escape the woes of those pubescent years. I was popular among all the different 'groups', if you will, and had a rather turmoil free existence in the halls. I was well liked by the teachers, except for one. Ms. Steel (don't call me Miss or Mrs) explained it as she "expects more from me than the others". I thought she was just being as her last name suggested. Or something that starts with a capitol B.
I was on the track team. I even held a school record at one time. I'm sure it's been surpassed by now. I was in ski club. Until they canceled some of the trips for kids being kids. Weren't we supposed to push the boundaries and try to sneak alcohol? Hello? And I was on the cross country team, but hated running long distances. I was there for the camaraderie. No other sport was as close as the cross country team.
I was invited to all the dances. I went to all the parties. I was voted best dressed of my senior class.
It was all pretty drama free.
No. There isn't any reason why I shouldn't want to go back and reminisce my high school years. There was some heartbreaking experiences. Like when Buffy, the rich biatch of our school, decided she wanted something. Which one year was my boyfriend, the football center. That was pretty hard on my tender young ego.
I remember the outfit I made to wear for Ohio State - Michigan games. Do you remember the corduroy pants that had different colored panels on the legs? In my consistent vein of staying neutral, I made my own patchwork pants. My left side was red and gray, the right was blue and yellow. I know, clever wasn't it. Great fashions of the times. There is even be a year book photo of it somewhere. Although who would know...the photos are all black and white.
And I remember the extremely funny events which remain fresh in my memory. Like when Cleo thought she could make the switch from cheerleader to sprinter. Let's just say she was a little heavy. On top. I do believe every male in the school were in attendance for that spectacle.
When I ran into her on campus at Indiana University years later, I said, "Hi Cleo!"
"It's Charlotte."
Well, excuse me. Correction taken. The next time I saw her was as a centerfold for Playboy. Not as if that was shocking to anyone. I'm guessing she won't be on the confirmed guest list attending the reunion. Although if she were, I'd place bets that all the males would again, be there to witness it.
No, I certainly don't have the Bruce Springstein's attitude of the "Glory Days" of high school. There wasn't anything in high school that I look back and think, "Sure do wish I were back in High School, those were the days..."
Most of my favorite high school memories revolve around the "Happy Bunch". Gordon, Dave, Mike and I; we were inseparable. One afternoon Gordy's dad coined our name. In total deadpan, he said, "Oh, it's the "Happy Bunch'." And it stuck. I recently had the pleasure to catch up just a bit with Gordy, thanks to Facebook. It had been twenty-eight years since I spoke to him, and yet here we were back to sounding like two teenage kids yaking on the phone. He even came to my mothers funeral a few months ago. But I've no idea what happened to the other two. Gordo's lost track of them as well.
Time is a funny thing.

This weekend I'm attending a childhood friends wedding. I'm so happy for her! It's her second marriage. The first was quite a challenge, to put it mildly. She endured a string of deception and disappointment, along with four children now mostly grown.
She lived caddy-corner from me growing up. Her birthday was two days before mine and we did everything together growing up. We were a synchronized swimming duet team for the Flamingo Club. I was the one under the water pushing her up so she could get all the 'ooooh's and aaaah's' things with her legs above the water. I was the unseen power behind it.
It was nice when she moved into our neighborhood. Before Beth, it was all guys...and me. We had a Girl Power clubhouse in the crawl space above my garage, before the term girl power was even coined. We dressed alike. We rode the same bicycles. We had the same haircut. When leaving the house, my mom would say, "Where are you going?"
"Beth's house!", was always the reply.
Or some days it would be just the opposite conversation at her house. "Nancy's house!"
And that's how it was. Until high school.
Then Beth became a band geek, and I wasn't. I was still friends with Beth, but she had her own posse by that time and we didn't hang out much anymore. We still got together for our birthdays, but it just wasn't the same.
Beth got pregnant in our senior year. She left school in January. She quietly got married and had a daughter about the time I left for college. As her father was a pastor, that was the only road available to her.
Our lives that seemed so much alike in our early years, had taken a drastic turn down different paths. And we lost touch. But again, thanks to the Internet and Instant Messaging we have maintained pretty good contact in recent years. It blows me away when she talks about her grandchildren when my daughter is just in fifth grade.
It's like in the movie Mr. Destiny with Jim Belushi. When you can pinpoint a specific event that would totally transform your life.
Beth's life was changed in high school.
The stark correlations between our two lives makes me ponder how disparate my own life would be had I changed a few of my own choices. Would it be better? Would I be happier? Richer, poorer, thinner, wiser?
Who knows.
A bloggy friend of mine at 'Your not my Real Mom' wrote a post recently that has stayed with me for weeks. Her stepdaughter was telling her about a classmate at fifteen who planned to get pregnant. Fifteen! Planned! The two words when talking about pregnancy shouldn't even be in the same sentence. It made me think about my friend Beth and how that changed her life. But Beth's pregnancy was an accident, not planned. The movie Juno glorified teenage pregnancy, but at fifteen you aren't prepared to make decisions for yourself, let alone care for an infant.
On the other hand, my having waited until I was in my thirties to have a child puts me on the other end of the scale. Although in my social circle, there are more mothers my age than not.
But all this leads me back to the reunion. I wonder what happened to the people I used to know from class and eat lunch with? It would be interesting to put the new, older faces with the names of my youth. But if I've lived thus far without having them be part of my bubble, do I need or want to get together with them now?
I guess I don't need to make a decision right away. The reunion is over nine months away.
Nine months is time enough to have another child. Or get married. Or go to the gym.
I think the most viable option is the gym.
And if I DO decide to go, I've got my eye on this wonderfully slinky black ensemble.
If I were ten pounds lighter would make it look just killer.
After all, I was the best dressed of my senior class.
I might as well stay there.
:-)