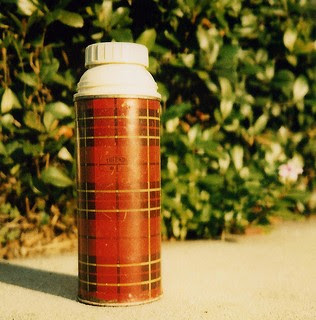 One of my favorite movies is "The Jerk" with Steve Martin.

I know, I know. It didn't win awards, it's not a brilliant film. It's silly. But it truly is genius.
It's been recently making the rounds on cable. A friend was over the other day was channel surfing. He stopped at The Jerk. I wasn't really paying attention to the screen as I was reading my blogbuds posts on my computer. (shocking)
I was just unconsciously saying the lines along with the movie.
He was amazed.
"How do you know that?", he asked.
"Know what?"
"You're practically reciting the entire script!"
I had a boyfriend back in high school. We went to see the movie when it came out. It became OUR movie. It turned into an inside joke. No one else quite got it, but we did.
He gave me daisy stems for my birthday.
I gave him an old thermos.
We used to sing the 'thermos song' to each other...
"I'm picking out a thermos for you.
Not an ordinary thermos, it's true.
But the extra best thermos money can buy
With vinyl and stripes and a cup built right in.
I'm picking out a thermos for you.
And maybe a barometer too.
And what else can I buy, so on me you'll rely.
A rear end thermometer too."
Brings tears to your eyes it's so romantic, doesn't it?
HeatherLynn had left a comment the other day that I wanted to personally answer. So I e-mailed her. I apologized because I didn't respond immediately. There have been alot of comments of late and it's been taking a little bit more time than usual to get back to everyone. That whole thing called 'life' kept getting in the way and drawing me away from my computer screens.
She sent a return message and I quote," NANCY!! You didn't have to write me back! You're much too famous for me! ;-)" End quote.
Awwww.
Sweet. But, c'mon now! I'm not famous! I just had the luck of the draw! And now I have all these wonderful new friends. That's been the best part of Blog of Note. That I now have had the opportunity to find all these other blogs outside of my 'normal' circle. Blogs that I might not have ever stumbled upon otherwise!
THAT, my friends, is cool.
Seven degrees of separation. Seven degrees.
And it turns out Heather is from Ohio as well.
Knucklehead (go give him a wedgie for me...please) wrote me, "Congrats! Just don't forget us little people who were reading you BEFORE you were famous."
Forget you? How could I forget you! You're on my sidebar! I read every post you've written! As I urge everyone else to do as well....(blatant promotion plug) :-)
Even Matthew got in on the razz attack and said, "Hard being adored, isn't it?"
You guys are funny. Very, very funny...
So many new friends, plus all of my old ones. But I'm not famous by any standard.
I do, however, feel a little like Steve Martin in the movie.
"The new phone books are here, the new phone books are here! I'm somebody now! Millions of people look at this book everyday! This is the kind of spontaneous publicity, your name in print, that makes people. Things are going to start happening to me now...."
I just hope there isn't a sniper nearby.
Or any cans.
I still have some comments to respond to.
:-)